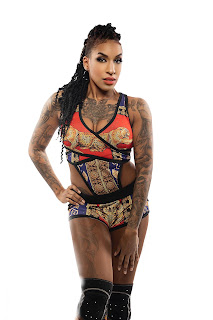 I’ve wanted to wrestle since high school during the attitude era while watching Jaqueline and Chyna. I didn’t start wrestling until over a decade later while I was a fitness model/competitor and I noticed that a few women that were competing in bikini/figure competitions like Kaitlyn and Alexa Bliss were getting signed so that inspired me to research training dojos in GA and decided to start training while performing as a valet.

2. How did your friendship/alliance with Rache Chanel begin?

We both trained at DFW All-Pro in TX and our trainer Lou pointed out that our gimmicks were similar so we got paired up in one of her matches where I did a run in to help out my good Bougie sis. The rest is history and hopefully, we’ll make more together one day. 3.Tell me how you and Rache came up with the name Bald and Bougie?

It’s definitely a play on the term “Bad and Boujee” I was already using the phrase “Bald & Bougie” when I debuted as Flex Rated in Texas. But since we both had bald/short hairstyles at the time and we’re both fabulous in and out of the ring, we realized it was a perfect tag team name so we immediately decided to start shooting content/promos together which was so much fun.

4. Tell me something about yourself that many fans don’t know?

I was an Opera singer for 7 years and I have a Bachelors Degree in Music Performance.

5. What’s your favorite and least favorite thing about being a professional wrestler?

My favorite thing is performing for the fans and giving them and myself an escape from the trials and tribulations that we all face in our daily lives. My least favorite thing is COVID keeping a lot of us out of the ring for now. Hopefully, that will change sooner than later.

6. What’s some of your favorite tattoos that you have and what meaning do they have?

My favorite tattoo is my jellyfish leg sleeve which symbolizes “deadly beauty” I also love my chest piece which is a clock and a butterfly which symbolizes the phrase “time flies” because life is so fleeting.

8. What inspired your t-shirt design “Queen of Pops”?

Now that I’m known as Flex Kalifah I’ve evolved from the Bald & Bougie Baddie known as Flex Rated, to a full-fledged Queen. Pops has a couple meanings, I “pop” my opponents with a superkick or a punch (notice the punch/fist-shaped marshmallows on the shirt lol) but I also “pop” the crowd with amazement with a flip of my hair after a Hurricanrana.

9. Growing up, who were some of your favorite wrestlers?

10. If you could only have one more match, who would you want to it be against and why?

Sasha Banks because she puts on stellar matches and has become so flawless when telling the story in the ring, not just physically but emotionally as well. You can see the emotion and passion in her face and she’s such an amazing athlete 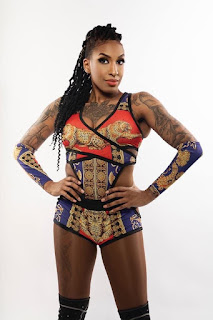 Posted by O-Face Wrestling at 1:54 PM No comments: