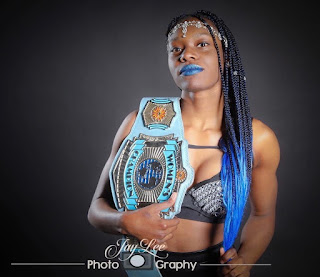 Instagram
Twitter
As a teenager, Gia Scott sat in the crowd as a fan at MCW cheering on her favorite wrestler Amber Rodiguez. Finally, at the age of 18, she started her training to become a professional wrestler at MCW. Now almost four years later she is a 3-time/current MCW Women's Champion. At such a young age she has already accomplished a lot, and she is nowhere near done to adding more accomplishments to her resume.
1. What inspired you to become a professional wrestler?

When I was young, I would always watch WWE whether it be on Mondays or Fridays, but my mother only really allowed me to watch it on Fridays. I would always watch the latest Raw or Smackdown with my uncle. I eventually ended up seeing bra & pantie matches, pillows fights, bikini fights, etc.… and as a little girl you probably don’t want them to watch that but I was more interested not what the women were wearing but what they were doing, they were wrestling like the men and I thought that was so cool! After watching it for so long I knew I either wanted to become a model or a professional wrestler.

2. How did you feel when you became the MCW Women’s Champion for the first time?

I was overall happy. I felt like everything I was working towards finally paid off and I was trusted with stamping my name with other women who had held the championship, though it was bittersweet… I was not able to share that moment with my mother because she passed away before I started my wrestling journey.

3. Amber Rodriguez being your top dream match, if you could pick a stipulation for the match what would it be?

A last standing man match. I want to go toe-to-toe and have an all-out war with her to see who is standing tall at the end while bringing their full A-game.

4. Outside of Amber Rodriguez, who is your second top dream match on the indies?

Sumie Sakai (again), Kimber Lee, Jessicka Havok, Angelina Love (again) and Taya Valkyrie… I could go on for days! I fought both Angelina and Sumie before and I had a blast which I would love to do again but for the rest of the other ladies, I have never fought before. Kimber Lee is someone I want to face since I first saw her at an MCW show and I have not given up on that dream. Jessicka Havok… I do not know, something in my body is saying “You have to face her” to go up against someone like her just screams fun. Taya Valkyrie, I mean how could I not want to face the former Women’s Knockout Champion? I’ve been watching her matches since last year and she isn’t one to mess with, but I hope to one day face off against them. There are definitely more I would love to face that I’m forgetting about but the sky is the limit and I would love to face anyone.

5. You are a 3-time MCW Women’s Champion, Renee Michelle is a 4-time. Is it a goal of yours to surpass her record?

It has been a goal of mine since I first won the women’s championship and if I could not surpass her, I would love to be the one who has the longest reign surpassing Melina. 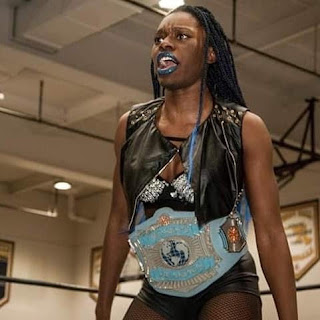 6. What is your opinion on intergender wrestling?

I find it interesting. How can I get the crowd into it? How can I make the match more than just it being your typical “big strong man vs helpless woman”? I’ve literally in my 3 years on training have fought men countless of times and honestly some of the things I did not think I could do I learned from practicing or wrestling with them. I do not have much of an opportunity to train with the women at the MCW school which is why the majority of the time I wrestled with the guys. I can understand why some people do not like it, but I feel as though if you tell a story with it, you cannot go wrong.

7. What about yourself that you would want your fans to know about you that is non-wrestling related?

I love to play video games and I love to roller skate and I am also creative (it can be towards a lot of things) I just have a really creative mind. Before this pandemic hit I would roller skate whenever I could because besides going to the gym to get a workout, I would go skating to keep me in shape. You would be surprised how much it wore me out once I finished skating 4 hours straight. It really helps to keep your mind clear, burn a lot of calories, and it was fast pace but the only thing I did not like was bobbing and weaving through kids, adults, and slow skaters.

8. What are your plans for life after wrestling?

I honestly do not know. I’ve asked myself this question many times before and I did say I want to still be involved with wrestling, whether it be me being a coach or anything more after that I still want to be involved but I do want to wrestle until my body says I can’t. Wrestling has been a big part of my life and I cannot see myself completely forgetting about it.

9. What have you been doing during the pandemic to get ready for wrestling?

I roller skate to pass the time, you would be surprised how much of a body work out it is. I was not able to do it as much because wrestling was happening left and right plus on my training days, but it feels good to at least do it once again.

10. What is one thing that you want to be remembered for when your career as a wrestler is finished?

I want to be remembered for how great I was and what I brought to the table as a black women’s wrestler. You barely see or hear about people like me who try and prove someone with their in-ring work and that shouldn’t be the case, I also want to prove that women can also go toe-to-toe and survive in this wrestling business. 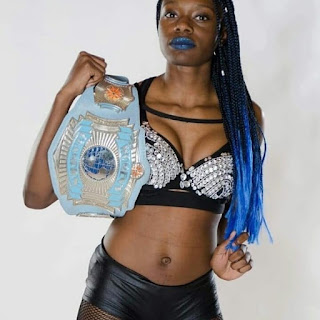 Posted by O-Face Wrestling at 6:30 AM