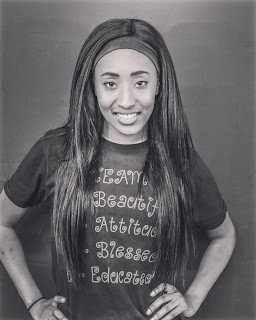 Instagram
Twitter
Facebook
Camron Bra'Nae is a young upcoming wrestler who started wrestling in 2018 at the age of 20. Camron has wrestled for Evolve, WWN, Rise, Respect Women's Wrestling, as well as WWE when she competed versus Lacey Evans, on Smackdown Live in October of 2019. She has also competed against some great talents such as Blair Onyx, Sierra, Mickie Knuckles, Marti Belle, and Tootie Lynn Ramsey.
1. What inspired you to become a professional wrestler?
The thing that truly inspired me to be a professional wrestler would have to be seeing the feud between Randy Orton and Triple H. As a kid and still to this day I talk to my cousin about when we went to the Sprint Center in Kansas City when Randy had handcuffed Triple H to the ropes and kissed Steph after hitting her with an RKO. How invested I was and how the crowd was booing so hard, in the inside I was telling my young self like wow!!! This is crazy, the man has everyone in the palm of his hand and I just knew that was the reaction, and the feeling I wanted to get. To have people invested in a story I was telling someone else!
2. How did it feel to have an opportunity to face Lacey Evens on Smackdown Live?
Having the opportunity to face Lacey was such a crazy and I mean crazy feeling!!! That whole day was honestly a big blur to me other than being inside the ring with Jason (the ref) and hearing her music hit. I legit was smiling so hard and I think it was before the camera had cut to my face. Once after that, I do not remember it was like a blackout moment for me in a sense, then after having Lacey sit next to me in catering and us both watching the segment/match together. I could not believe it was truly happening. 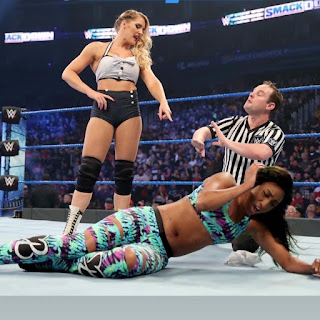 3. As a professional wrestler, you are looked at by many as an idol, what is it like to have so many fans look up to you, as well as wanting to meet you?

It's more of a shocker when I think of people looking up to me. I see it a decent amount of times and I’m like who? Camron who? Haha. And seeing little girls make fan pages of me or make their profile picture me, it’s insane, like to me I'm just a little nobody from Missouri. Did I really make a full connection with someone? Because as fans they don’t just connect with you on a wrestling level, they connect with you on a personal level, that’s why a lot of people have athletes that they love and that they hate because in some way or not they connect with that person if it's positive or negative.

4. Name one wrestler on the independent circuit that you are most looking forward to facing?

So I'll make this kind of a straight to the point answer.

I was in Texas with a promotion and I had met the best ring announcer named Mitch Mccoy. We were joking around backstage about this jersey that I had bought from JCPenny because I was thrown into matches so fast, I didn’t know who I was or what I wanted to become. So I quickly took my work shorts because at that time I was working at Hooters. Took the white print off and went to the store and found the jersey that said team babe on it. It was mesh, I was like cool let’s buy it, it's cheap. Back to the show, Mitch had said so what is team babe I shrugged and said I do not know and told him my story. He then says it would be funny to call you the captain of team babe. We all laughed said sure and he did it one day at a show in Texas, Next thing I know I was getting gear, merch, and signs with team babe posted on it. From there I thought to myself who am I, how do I relate to the word babe that my fans came as well because in my eyes everyone is 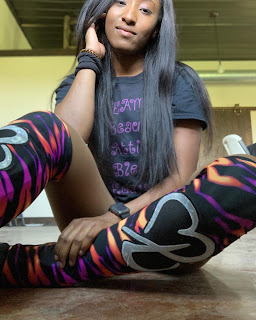 *crying* sadly gummy bears lol no wrestling…yeah panic…wrestling but can I still have gummy bears on the side??.. Let's talk about this...

6. What about you that is non-wrestling related would you want fans to know about you?

Umm, nothing really, I truly feel like I am a very open person when it comes to my fans, they see just about every crazy thing that I do. I normally have no problem telling people embarrassing moments. For example, me falling down the stairs into catering at WWE RAW in STL.

7. During this pandemic what have you been doing to get yourself ready to get back in the ring?

Eating right, hitting workouts at kickboxing and lots of cardio, inside and outside of the ring.

8. After your wrestling career, do you have any wrestling related plans? Such as commentary, owning a promotion, in-ring manger, etc.

To be honest anything that has to do with sports if that’s manager, commentating, talent relations, creative, announcer, medic, anything to keep me involved and that also goes for other sports as well.

9. What is your favorite and least favorite thing about being a professional wrestler?

The most favorite and ill keep it simple, the connections we have and get to make with the fans.

Least Favorite will have to be for sure the creepy old men asking if I want a sugar daddy or trying to kiss me at shows, hugging for a long-time, stuff like that. I’m super friendly and love everyone but when you make me uncalmly then it's like wow we are hitting a whole new level haha.

10. What are your thoughts on intergender wrestling?

Love it 100%. Its equality between both genders I feel. Equal opportunities and also a lot of things men can do that woman can't and also vis versa which is why those matches are key to talent and to fans. In my opinion. 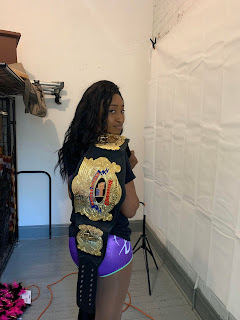 Posted by O-Face Wrestling at 1:35 PM